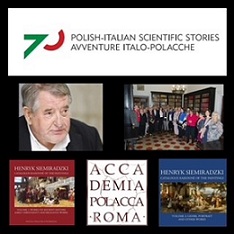 Polish artists in nineteenth-century Rome, although a small group in terms of numbers, made their presence felt in the Eternal City. They had their own meeting places, favourite corners and well-worn paths. Siemiradzki, Brodzki, Stankiewicz, Ciszewski, Bakałowicz are just some of the names of Polish artists, mostly painters, associated with the city. The most important representative of the Polish artistic colony in Rome was Henryk Siemiradzki, who in fact spent his entire creative life in Rome. Siemiradzki's villa in via Gaeta, which no longer exists, became another place, besides Caffe Greco, where Polish artists gathered to discuss art and Polish issues, as well as to seek support or advice. On the occasion of the 175th anniversary of Siemiradzki's birth, an international conference was organised in 2018 in the Scientific Center of the Polish Academy of Sciences in Rome, resulting in a book in the PAN's Conferenze series - number 145, edited by dr Maria Nitka and dr Agnieszka Kluczewska-Wójcik https://rzym.pan.pl/.../seria-wydawnicza-conferenze-pdf A very interesting result of the research on Siemiradzki is also the Corpus of the artist's works, published by the Polish Institute of World Art Studies, a complete study of the artist's oeuvre, based on extensive searches in Rome, among other places, and much more in-depth documentation. The good spirit, but also the indefatigable organiser of these initiatives, is Prof. Jerzy Malinowski, an art historian working at Nicolaus Copernicus University in Toruń, president of the Institute of World Art Studies, and a specialist in 19th- and early 20th-century painting and art criticism, 20th-century avant-garde (expressionism, constructivism), Jewish art and so-called oriental art.

Ep. 52: Polish-Italian research on the structure and function of the protein corona at the interface of nanoparticles 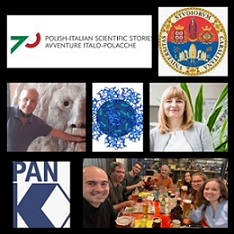 The research team led by prof. Barbara Jachimska from the Jerzy Haber Institute of Catalysis and Surface Chemistry Polish Academy of Sciences in Krakow, together with a research team led by prof. Andrea Salis from the Department of Chemical and Geological Sciences, University of Cagliari in Italy, as part of the Canaletto project, conducts interesting research on the structure and function of the protein crown at the interface of nanoparticles.

Ep. 51: In search of traces of the Italian diplomat, consul in the Free City of Gdansk. 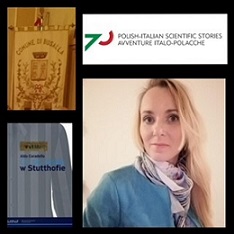 Little is known about Aldo Coradello, an Italian diplomat of the wartime period. Aldo Coradello was delegated to Gdansk in 1937 and, after the death of the consul, temporarily took over his duties, which he did until 1943. Coradello helped his Polish friends and acquaintances by issuing them with documents that enabled them to leave the country safely. He also took out letters, as he wanted to facilitate the exchange of correspondence between people who were no longer in Poland. Such deliberate misleading of the Germans and his overt anti-German stance brought him to the attention of the Gestapo. Coradello's superiors decided to transfer the regent to Saarbrucken as an educational measure. There, too, Coradello did not escape trouble. He and his wife were briefly arrested. This was done in order to teach him a lesson to stop showing resentment towards the German authorities. In spite of this, his political views did not change, which did not please many of Aldo's colleagues who, according to the Italian, collaborated with the Germans. For this reason, he was arrested again. After a gruelling stay in isolation, where he was subjected to torture, he was taken to Stutthof concentration camp on 12 June 1944. The only trace in Polish that remains of him is a small book concerning his testimony from his stay in this concentration camp, entitled "What happened in Stutthof". In Italian documents, Coradello's name only appears in a report made available by the Ministry of Foreign Affairs in 1975, Testi e documenti sulla politica esterna dell'Italia. The Italian appears there in the list of persons who actually represented the Italian government outside the country. In the National Archives in Rome, the entry 'Coradello' does not appear at all, nor does the official website of the Ministero dei beni e delle attività culturali e del turismo. Currently, the traces of the diplomat are being studied by dr Anna Szwarc-Zając, a researcher working on genealogical issues, in particular lag literature, together with its Italian and Polish autobiographical contexts. In 2016, the researcher opened the Cultural Centre ('Centro Socio-Culturale Polifunzionale di Casella') in the Italian city of Casella (Genoa). Since April 2021, she has been on the board of the research institute Istituto di studi storici Gaetano Salvemini in Turin. In 2014, she translated into Italian and coordinated the exhibition 'La grande retata. Settembre 1942", which has been exhibited several times in Italian museums. She has published in Polish journals: "Literaturoznawstwo", "Zagłada Żydów. Studia i Materiały "Pokłosie" and Italian: "QOL", "Instituto Lingue per la storia della Resistenza e dell'eta contemporanea", "Storia e Memoria". She won 3rd place in 2021 in the "Pole of the Year in Italy and the World" competition in the category: "Scientific activity". She is also editor of the Italian journal "Freeebrei".

The Polish Academy in Rome has no rooms for rent.