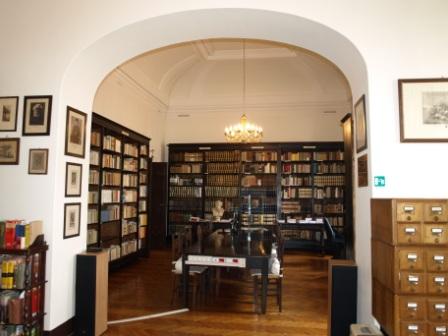 THE LIBRARY of the Research Center at the Polish Academy of Sciences in Rome is one of the biggest and richest Polish scientific libraries abroad. Its origins date back to 1921, when at the behest of count Józef Michałowski (1870-1956), erudite, lawyer and bibliophile, the nucleus of the Polish Academy’s Center of Arts and Sciences (PAU) in Rome was established. Count Michałowski made a donation of his books that covered such topics as Poland’s history, general history, Catholic Church history, law, and archeology amounting to four thousand volumes. These were designated for the use of scholars staying in Rome and conducting scientific research at the Vatican Archives, in particular in so-called Expeditio Romana.

The Polish Academy’s Center of Arts and Sciences and its Library was officially opened on September 27, 1927, which until 1938 was situated at the St. Stanislaus Hospice on Via delle Botteghe Oscure near Piazza Venezia. The Library began to gradually grow, due to donations and book deposits. In 1930, Count Karol Lanckoroński, Maecenas and art collector, donated to the Center about sixty thousand photographs of European art pieces, mainly Italian and pictures taken during his journeys across Poland, Italy and in the Middle East. The scientific collection of books was enriched by Stanisław Badeni’s donation of his library specializing in art history, previously belonging to the art historian Maks Dvořak. In 1938, the family of Italian historian and erudite, Alessandro d’Ancona, donated to the Center a rich collection of Scipione Piattoli’s manuscripts, who was a co-author of the Polish Constitution of May 3rd (1791). In 1935, the Library was enriched by the collection of Bronisław Gubrynowicz, professor at the universities of Warsaw and Lwów [now Lviv] and also curator of the Zakład Narodowy Ossolińskich [National Ossoliński Institute] in Lwów [now Lviv]. In 1938, Maria and Leon Siemiradzki donated books that had belonged to their father Henryk Siemiradzki.

In the same year (1938), the Library was transferred to a new location, near Piazza Venezia, on Via Fede (now vicolo Doria) 2, where it is currently located.

At present, the collection of the Library of the Polish Academy of Sciences in Rome contains over 35,500 volumes of non-serial publications (from old prints to modern books) and nearly 300 titles of periodicals, including 14,000 current titles and extremely precious complete sets of periodicals from the turn of the 19th century. Book collections in the field of humanities include: Polish and foreign dictionaries and encyclopedias, Polish literature works, diaries, memoires, bibliographies and elaborations on the history of Polish and foreign literature, publications relating to linguistics and the knowledge of Polish and Slavonic languages, collections of selected source texts and numerous studies, regarding Polish and general history, illustrated and critical books regarding Polish and foreign art (past and contemporary). There are also sections dealing with the study of religions, antiquity and archeology, law, philosophy, sociology and a less numerous ethnography section, some books in science and in science history, indexes and guide books.
The primary idea of the Library is to collect all of the most important publications dealing with Polish and Italian political and economic relations, Polish and Italian literary and artistic relations, as well as economic, scientific and military cooperation.
The Library conducts informatory for researchers from Poland and Italy. The Library’s collection and reading room is open to the general public. An up to date form of identification is required for access.