16-10-2014 THE LECTURE: THE DISCUTION ABOUT "WELTLITERATUR" AND NATIONAL LITERATURES TODAY

The lecture by the prof. Hanna Serkowska (Warsaw University) 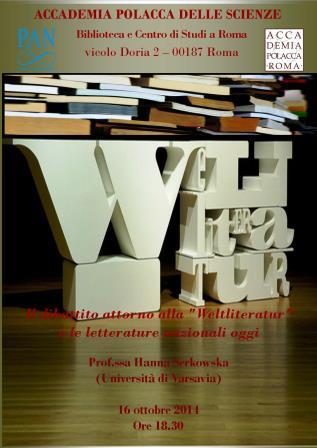 Hanna Serkowska, professor of italian literary and language at The Warsaw University. She studied in Poland and the United States. She is interested in contemporary (not only Italian) culture, literature and criticism. She is also a translator of Italian and English literature. The winner of the "Premio Elsa Morante" for the section "Essays" (2004). The author of best-seller book Dopo romanzo storico (2012), She directs the Dipartment of Italian Language and Literary of the Warsaw University.

In Italy, against the very few skeptical voices who perceive in globalization an obvious threat for indigenous tradition and language, there has been an increasing number of propagators and enthusiasts of Weltliteratur who praise the benefits that come to us from translation and emphasize the need to revise educational models. Yet the status of debate about national culture and language gets complicated by the fact that the notion of nation, with its roots in fascism, has not yet been freed from that historical mortgage, even while the "national" has recently been contested by luminaries of "planetary creolization", i.e. those who want to include the migrants into the national canon, or even pride themselves to contest the very distinction between indigenous and migrant production. As also the notion of belonging is increasingly challenged, what are we defending when trying to defend locality?