30-09-2014 THE LECTURE: THE CROSS AND THE GRIFFINS. ABOUT A ROMANESQUE TYMPANUM IN WISLICA 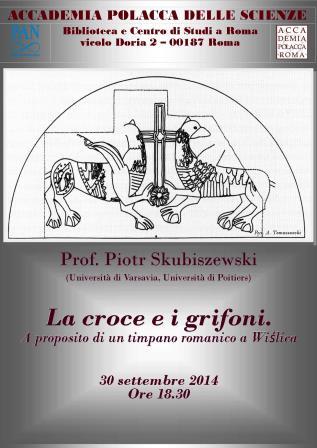 Piotr SKUBISZEWSKI is a Polish art historian and an expert in medieval art. Emeritus Professor at the University of Warsaw and the Universit‚ de Poitiers; Doctor Honoris Causa of the Catholic University of Lublin and of the Universit‚ de Poitiers. He studied History of Art at the University of Poznan (1949-1954) and at the Centre d'Etudes Sup‚rieures de Civilisation M‚di‚vale in Poitiers (1957-1958). Between 1953-1964, he worked at the Adam Mickiewicz University in Poznan, where he received his Ph.D. in 1958, and was granted a higher academic degree of Doktor Habilitowany in 1964. He also worked at the State Institute of Art, and then at the Art Institute of the Polish Academy of Sciences (1955-1957 and 1965-1967). At the University of Warsaw, he was awarded the title of Associate Professor in 1973, and the title of Full Professor in 1983. Between 1981-1987, he was professeur associé‚ of the University of Poitiers, and then a titular Professor of the same university until 1999. He is a member of the The Study of Art Committee at the Polish Academy of Sciences (Chairman between 1991-1996), a correspondent member of the Polish Academy of Sciences (since 1998), a regular member of the Acad‚mie Europ‚enne des Sciences, des Arts et des Lettres in Paris. A member of editorial boards of academic journals, such as Biuletyn Historii Sztuki ["Bulletin of Art History"] and Arte medievale; between 1993-1999, he was a director, now an honorary director of the Cahiers de Civilisation M‚di‚vale. He lectured at many European and American universities; he was a visiting professor at Uppsala University (1967) and Kansas University (1975). He was awarded a gold Medal for Merit to Culture Gloria Artis (2012). He is an author of many publications, e.g.: Rzeźba nagrobna Wita Stwosza [Veit Stoss's Tombstone Sculpture] (Warsaw 1957), Sztuka Europy łacińskiej od VI do IX wieku [The Art of Latin Europe from the 6th to 9th Century] (Lublin 2001, Italian edition in 1995, French edition in 1998), L'image de Babylone aux Serpents dans les Beatus. Contribution à l'étude des influences du Proche-Orient dans l'art antique du haut Moyen Age (Paris 2000, co-author: Lucien-Jean Bord), La Croix dans le premier art chrétien (Paris 2002).

The subject of the paper is the image of the Cross and griffins on Romanesque tympanum of the Collegiate Church of the Birth of the Blessed Virgin Mary in Wiślica, in southern Poland. The Collegiate Church was most probably founded by two brothers, princes Henry and Casimir II the Just. The former, Prince Henry, was killed during a failed expedition against pagan Prussians in 1166, and was buried in the church. The tympanum is the work of an Italian sculptor active in Poland in the third quarter of the 12th century. The griffins grab with their claws a 12-petals rosette – a symbol of flourishing land, the Work of Creation – and threaten the Cross. In this presentation, we can see an image of monsters, or devilish powers attacking the Work of Salvation. Such comparison of nations hostile to Christianity to savage beasts often appears, not only in the works of ecclesiastical writers (Paulinus of Aquileia, Rabanus Maurus, the anonymous author of the treaty De bestiis et aliis rebus), but also in the works of chroniclers describing the expeditions of German and Polish princes against the pagan tribes of Polabian Slavs, Pomeranians, and Prussians (Gallus Anonymus, Helmold von Bosau, Ebo von Michelsberg, Vincentius Kadłubek); the inhabitants of Sicily (possibly of Greek origin) who dared to oppose Richard the Lionheart when he raided the island were also called griffins (chronicler Ambrosius, Richard de Howden).